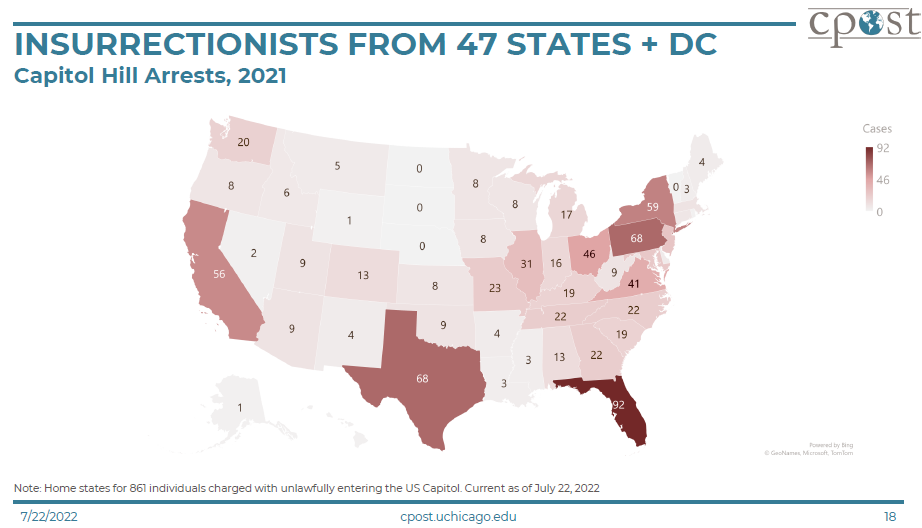 This report presents the lates update to CPOST’s data and analysis of “who” stormed the US Capitol on Jan 6, 2021 to prevent the certification of Joe Biden as the legitimate president of the United States. Only if we know who we are dealing with can we create viable solutions for the future. The report is based on CPOST’s January 6 Database, which includes detailed demographic, geographic, and biographic data on all individuals charged by FBI, Capitol Hill Police, and DC Police for offenses related to the US Capitol attack. In the original report released January 28, 2021, the number charged was under 200.  This report analyzes the nearly 900 that have been charged as of July 22, 2022. Inspite of the more than 4-fold increase in cases, the conclusions continue to stand.

The data continues to show that the violent support for Trump constitutes a mass movement:

In sum, the ingredients are all there to accelerate the growth of the pro-Trump insurrectionist movement: A leader with demonstrated support for extra-legal and anti-democratic mobilization; grievances perceived by large masses of people (a stolen election) and a deadly focal point event: The Jan 6 storming of the US Capitol, leaving 5 dead