The Jan 6th Hearings are Reducing the Violent Threat to Democracy, According to Latest Survey Chicago Project on Security and Threats
Robert A. Pape  |  September 25, 2022

With the January 6th Committee hearings resuming, many wonder whether they are making a difference.

A healthy dose of skepticism made sense before we witnessed weeks of Republican loyalists to Trump – including close Trump White House advisors and so many other credible witnesses – provide powerful, detailed testimony that Trump endorsed, if not out right planned and directed, the violence on January 6th to keep himself in office even though he was told repeatedly by his close advisors that the election fraud claims were false.

But, what about now? Have people changed their minds, especially the most violent supporters of Donald Trump?

The answer is yes. Based on highly reliable national surveys of political violence in the general population in the United States, there is strong reason to think that the number of Americans supporting the use of force to restore Trump to the presidency a la January 6th is lower today than before the January 6th Committee hearings began.

Since June 2021, the University of Chicago Project on Security and Threats has conducted nationally representative surveys of violent sentiments for political causes among American adults. These surveys are fielded by the highly reputable NORC at the University of Chicago using the gold standard of polling methodologies – drawing large random samples from panels of 40,000 individuals matched to the US population on dozens of demographic, socio-economic, political, and other factors.

Our most recent CPOST/NORC survey on political violence was fielded September 9-11, 2022 – just two weeks ago – and sampled over 3,000 respondents, with a margin of error of 2.4%.

The crucial question asked respondents whether they agreed, “the use of force is justified to restore Donald Trump to the presidency,” which we have asked, word for word, in four surveys over the past 15 months.

As the chart below shows, 5 percent of our sample – the equivalent of 13 million adults now agree with that statement. 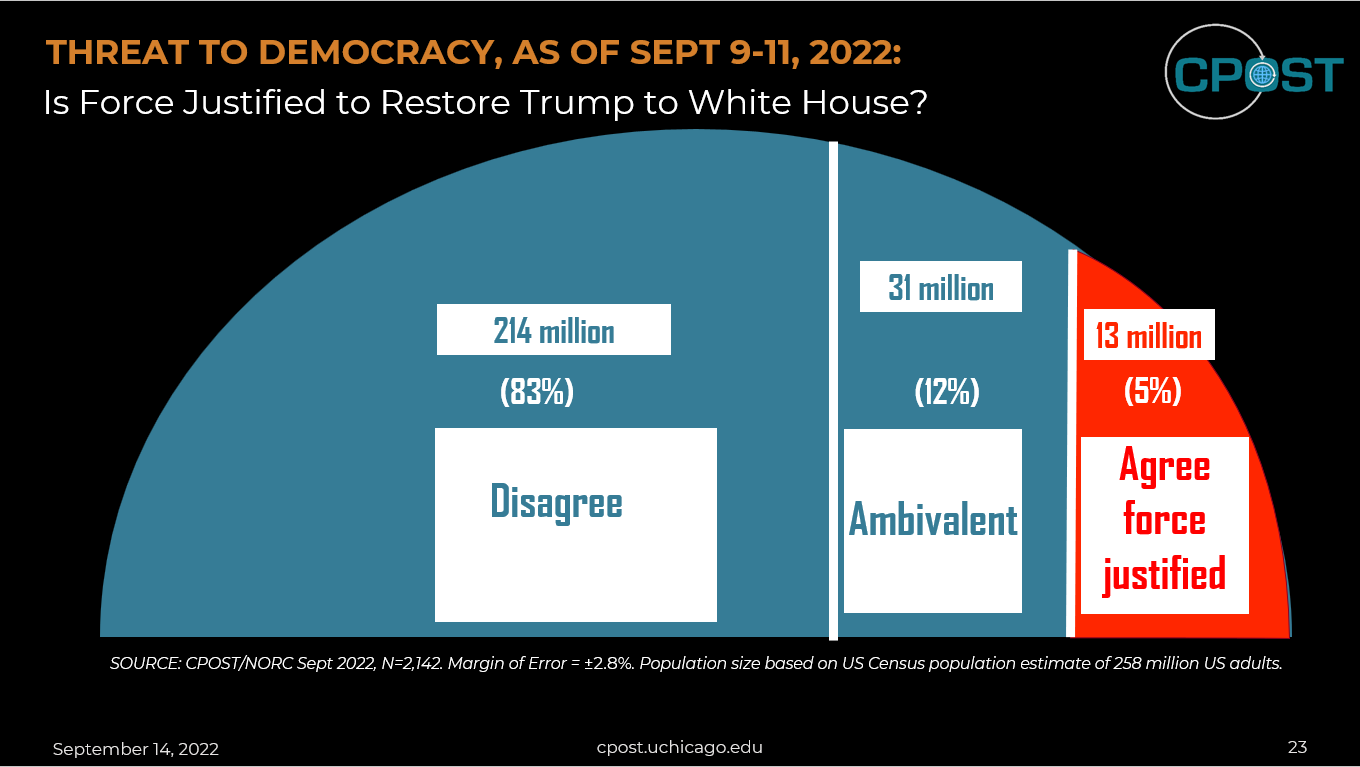 This number is sharply down -- by over 33% -- from April to September 2022, from 21 million to 13 million. To be clear, although we observed ebbs and flows in the previous periods that were largely within the margins of err, the sharp fall over the summer of 2022 is well beyond the margin of error and is clearly a real decline. 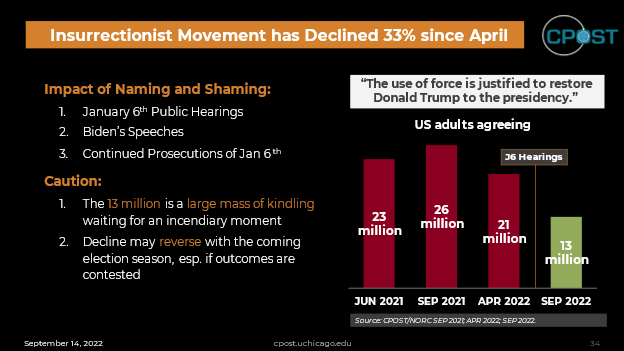 Why the drop in the number of violent supporters for Trump? Although we cannot be sure, the pattern of data over time does provide important clues to the answer.

The recent decline is unlikely due to de-platforming Trump or simply arrests for January 6th, since these occurred or started in earnest in early Spring 2021 and did not stop the numbers from trending slightly upward from June to September 2021. General fatigue with Trump and belief that the 2020 election was stolen are also unlikely to have played a major role in the summer 2022 decline, since our Fall 2022 survey found that favorability to Trump and belief in the Big Lie are only slightly lower now that in the past.

Instead, it is hard to escape the role that the January 6th hearings combined with President Joe Biden’s prominent “naming and shaming” the violence on January 6th and violent Trump supporters likely led some violent supporters of Trump to think again.

To be sure, we should not over-read these results. The recent dip in violent support for Trump could reverse as we head into the most tumultuous phase of the midterm election season.

Further, at an estimated 13 million, the violent threat to democracy is far from over. These 13 million violent Trump supporters are endorsing truly dangerous action. To clarify what they meant by “use of force,” we asked separate samples in our survey the same question with and without the additional phrase “even if some people are injured or killed.” The percent agreeing is the same in both sub-samples, which means the 13 million believe “lethal” force is justified. 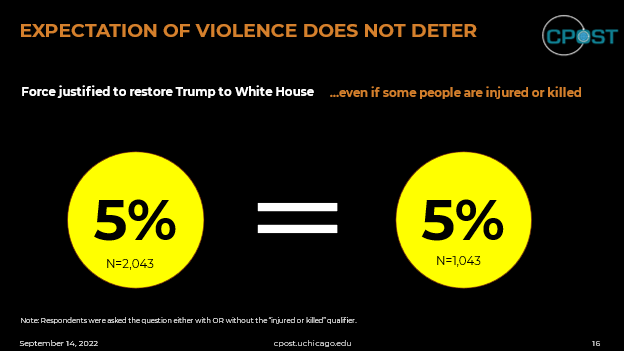 These 13 million provide more than enough legitimation to worry that would-be violent actors to take action, just as we saw when a Trump social media post after the raid on Mar-a-Lago galvanized vast numbers of supporters and led to a proud Trump supporter attacking the FBI building in Cincinnati.

Yet, for the first time since January 6th occurred, there are meaningful signs of hope. These results show that some violent supporters of Trump – even those captured by conspiracy theories about “great replacement” (that whites in our country are being replaced by minorities and third world immigrants in a coordinated plan by Democratic party leaders) and the “QAnon cult” idea (that a group of deeply immoral leaders are running the US government) – are willing to change their mind about the use of force for Trump, even if they still support him politically.

This is progress. This shows that facts still matter. This also shows how America should prepare for what could easily become another tumultuous period after the November 8 vote.

With over 100 election deniers on the ballot and the stakes so high for which party controls the House and Senate and other national offices, there is reason to be concerned about replays of “stolen election” allegations and other severe stressors to the proper certification of election results that could spark violence.

The progress over the summer points to a crucial strategy to defend democracy in the coming months. If fraud allegations occur, it is important to apply the lesson of the January 6th Committee hearings and President Biden’s speeches: simply defeating allegations in court is not enough, because the court of public opinion matters as much as courts of law.

Full, credible transparency and vigorous public condemnation of political violence carry real weight even in today’s polarized political environment. The January 6th Committee and President Biden have provided the leadership and it is crucial that they continue to do so.

The best course to defend democracy in the coming months is going further down the path that has achieved progress. The wedge issue that works for democracy is opposition to violence itself. So, our leaders across the political spectrum should mobilize the vast majority of both Republicans and Democrats who oppose political violence and support peaceful means of resolving disputes, especially after the counting starts on November 8.

Robert A. Pape is Professor of Political Science and Director of the University of Chicago Project on Security and Threats. Dr. Pape has studied political violence for thirty years. For the most recent research findings, click here.